Tens of thousands of Delta Airline passengers were left high and dry on Monday August 8 after a massive computer outage at its Atlanta headquarters caused a global computer failure that canceled all flights. 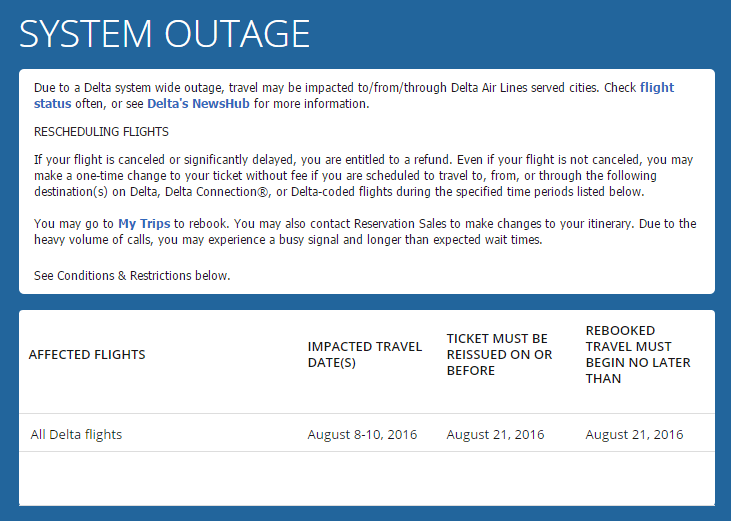 The cancellations were caused by a power outage that occurred at 2:38 AM ET in Atlanta where Delta is based. But Georgia Power has since come out and stated that the issue has to do with Delta’s equipment, not a larger power outage.

The check-in systems, airport screens, Delta’s website, and Delta’s mobile applications were all affected by the outage. By 1:30 PM, Delta had cancelled 451 flights and was operating 1,679 of the 6,000 scheduled flights, but the cancellations continued throughout the day.

While the outage experienced by Delta on Monday was massive, it’s certainly not the first of its kind. Last month, Southwest Airlines ran into computer problems that lasted for several days and ended up canceling hundreds of flights and causing extreme delays. Additionally, United Airlines experienced a computer glitch last year that delayed all its flights for nearly 2 hours.

Whether the outage be caused by a malicious cyber-attack or a plain computer error, the inter-connectivity built into almost all aspects of our lives means that one problem can quickly cascade into a catastrophe. The use of computers and automated systems have increased our productivity and efficiency levels certainly, but we need to have a backup plan for when something inevitably goes wrong.