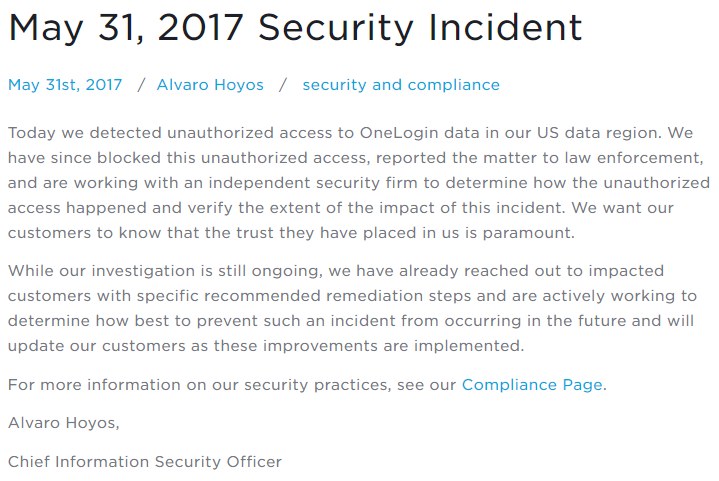 Multiple OneLogin customers reportedly told Motherboard they were told via email that “data data was compromised, including the ability to decrypt encrypted data.” These customers were also given a list of required steps to follow in order to minimize any damage from this security incident, including generating new API keys and OAuth tokens; creating new security certificates as well as credentials; recycling any secrets stored in OneLogin's Secure Notes feature, and updating passwords.

This is not the first time OneLogin has fallen victim to a security breach. In late August of 2016, the company notified customers that an attacker was able to take advantage of a bug in its system and view sensitive notes posted by users. The bug in the system was used by the company for log storage and analytics but was taken advantage of by hackers.

Using NNT’s sophisticated File Integrity Monitoring solution your organization is able to evaluate the normal operations of all of your systems and applications & will alert you to unauthorized or suspicious changes that could be a zero day or an otherwise unknown breach. Any change to the process, service states, registries, applications software, anything that might be subject to change can be tracked.

Read this article on InfoSecurity Magazine