A study conducted by Alert Logic revealed the majority of vulnerabilities in ports are found in just three ports.

The Critical Watch Report of 2019 claims that 65% of vulnerabilities found in Transmission Control Protocol (TCP) and User Datagram Protocol (UDP) ports are linked to SSH (22/TCP), HTTPS (443/TCP), and HTTP (80/TCP). This is followed by RDP/TCP which has been patched numerous times by Microsoft.

The number of vulnerabilities found in a port is the leading indicator of its popularity. Unsurprisingly, the three ports with the most vulnerabilities were found to be exposed to the public-facing internet. 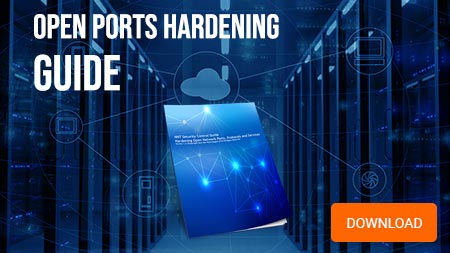 NNT suggests closing all ports that are not used, installing a firewall on every host, continuously monitoring and filtering port traffic, and conducting regular port scans and penetration testing to ensure there are no vulnerabilities left unseen. Taking it a step further, we also suggest patching and hardening all devices, software and services connect to ports, immediately addressing vulnerabilities as they are found, changing default settings and passwords, and running regularly scheduled configuration checks to reduce your attack surface.

Security leaders like the Center for Internet Security also acknowledge the need for Limitation and Control of Network Ports, Protocols, and Services in CIS Control #9. This control requires organizations to track and manage the use of ports, protocols, and services on network devices to minimize the windows of vulnerabilities available to an attacker.

To show our continued support for the CIS Controls, NNT recently partnered with the Center for Internet Security to host a webinar on CIS Control #9 - Any Port in a Storm of Cyber Security Remains a Problem. Join us tomorrow for our webinar as Mark Kedgley, NNT CTO, and Tony Sager, Chief Evangelist of Center for Internet Security discusses how to detect open ports and protocols on your network, what steps to take to mitigate these threats,  and what to consider when implementing a Hardened Port and Protocol Standard.