Today the UK government released a new Code of Practice (CoP) intended to drive security-by-design in the manufacture of IoT products.

The new CoP is designed to improve baseline security in the sector and ensure small devices that process personal data are aligned with the GDPR.

Regulations for improving the security of consumer-grade IoT products are also in the works.

It’s believed that this push for built-in security is in response to the serious risks posed to consumers and businesses from unsecured consumer IoT devices, including the infamous Mirai botnet attacks. Back in 2016, hackers exploited security vulnerabilities in weak IoT devices to conscript them into the botnet, involving over 300,000 compromised devices.

In response to the devastating attack, the UK government released a draft IoT Practice Code design to help manufacturers and end users better protect their IoT devices and personal data. The final code released this week has received welcoming responses from some, but others believe this is not enough.

Manufacturers have to accept that security must be built-in from the design phase to any new connected devices, not an afterthought.

Dealing with the potential threat posed by vulnerable IoT devices first requires understanding what you have. Your organization should regularly scan for all network-connected devices and be able to quickly identify what they are. Anything new must be checked for how it operates, what its capabilities are, and how it can be secured. Changing default username and passwords is a great first step in any successful hardening program, but disabling UPnP services where possible and firewalling where not, is also extremely important.

These thirteen essential guidelines have been identified by the CoP to help safeguard IoT devices: 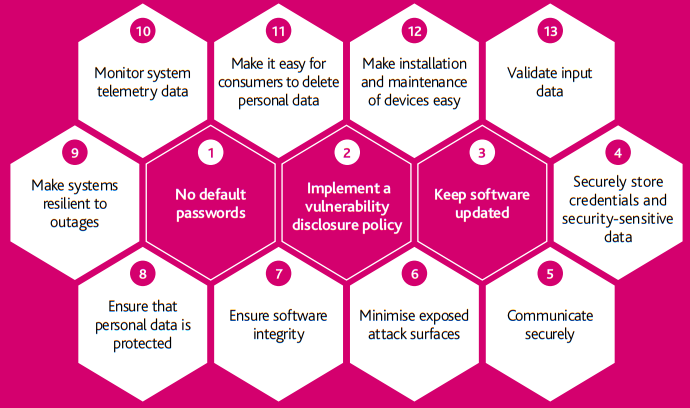 Learn more about the Code of Practice for Consumer IoT Security

Learn about the Mapping of IoT Security Recommendations, Guidance and Standards to the UK's Code of Practice for Consumer IoT Security